Trilby, The Way Life Should Be

(March 20, 2005 -- This document is not endorsed by the Trilby Community Association and does not necessarily express the views of any person or organization except its authors.)

Presentation to Pasco County and representatives from Glatting, Jackson Consulting, 11-11:30 am (time changed from 1pm), March 14, 2005

We are Richard and Kathy Riley.  We live at 20235 Old Trilby Road, Dade City, in the community of Trilby, Florida.

I am very pleased to present to you information about the Trilby area in Northeast Pasco as you gather information for the special overlay on the Pasco County Comprehensive Plan update.  I hope to give you a good description of Trilby and the surrounding area so you can better understand the character and the flavor of this area.

Following this passionate and opinion laden portion, we have some specific recommendations for the county to implement. 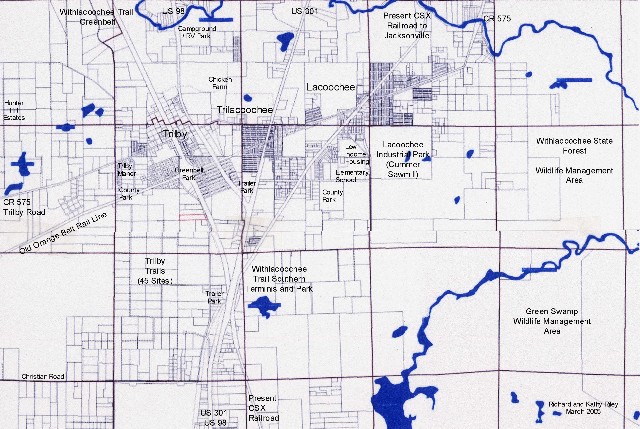 (click for larger version)
(Warning.  This is a 2 meg file that can take up to 10 minutes to load)

Trilby is the community centered near the intersection of SR 575 (Trilby Road) and US 98.  It includes the area north to the Hernando County line, south to Christian Road, and west to the “Pasco Honey” area on the Trilby/Blanton Road (SR 575).

Many people include Lacoochee in this same area, and so then the Trilby area could include the land to the east to the Sumner County line, which includes the Withlacoochee River, the Richloam and Green Swamp Wildlife Management Area and the Withlacoochee State Forest.

Trilby was created just before the turn of the 20th century as a junction of several railroads.  It was named after the heroine in George du Maurier’s novel, Trilby.  It was the story of English “Bohemians” befriending a young woman in Paris in the 1870s and her involvement with the musician and mesmerizer, Svengalli.  It had nothing to do with Florida, but the town was built at the peak of the novel’s popularity.

At one time four different rail lines met and exchanged railcars at the Trilby switchyards including the famous Orange Belt line.  The peak of the rail traffic through Trilby was during WWII, but traffic has decreased until today, there is only one rail line nearby that comes from Jacksonville to Tampa.  In fact, the line goes through the Owensburo Junction just southeast of Trilby and misses the old center of the town.  The CSX line does go through the Lacoochee area and there are several sidings and a spur to a designated heavy industrial park where the old Cummer Mill was located.

As Trilby had railroads, Lacoochee had the state’s largest cypress mill from 1920 to 1954.  When the mill shut down, the area entered an employment and economic recession, and most of the skilled population left.

As you know, Pasco County is really a residential county.  There is almost no industry here and not a lot of industries possible.  According to John Walsh of Pasco EDC, and the Pasco Growth Management Division, there are very few jobs in Pasco County.  In fact, the largest employer is Pasco County, itself (schools, government and sheriff), followed by medical centers.  Saddlebrook resorts and the US Postal service come in next.

For trades, medical services are first, followed by retail trade and then construction.  There is very little that brings new dollars into Pasco County besides retirement funds and people moving to the county as they buy new homes.

Since we don’t have industry, and probably won’t have a lot of it in the future, our plans must concern the builders, retail services and health/social services.

If left unmanaged by government, Pasco can become a densely built bedroom of the Tampa Bay area whose quality will decline in the next generation.  Or, with intelligent stewardship, there can be a thoughtful, legitimate and logical process of growth that maintains the integrity of rural life.

What is rural?  Please see “Rural Is, Rural Isn’t,” (Attachment B) by Jennifer Seney of the Pasco Wildlife Association.  It conveys a feel and vision of what most people would consider rural values.

In an ideal world, rural areas would remain rural, and the people who live there would not be bothered by change or growth.  In the real world, orange growers move south, patriarchs of large ranches retire and will portions of their estates to descendents who have moved away and don’t want to come back and run a ranch.  Cities like Tampa grow and workers have to move into new areas and commute.

Many people who have moved to the Trilby area in the past decades have moved here because of the quality of life.  The air is clean, the groundwater healthy and plentiful, the land inexpensive, and the ambience is peaceful.  Supermarket shopping is easily available by a seven-minute drive either northwest or south and “City Center” services are available at Dade City, the county seat.

People can walk or rent bikes for the Withlacoochee Trail or wander or rent canoes in the State Forest.  Horse owners can ride down residential streets.  Dirt and paved roads are well maintained by the County.  Activities at the community centers are on the upswing with newly organized community associations.  Two post offices establish community identity, and provide central gathering places and bulletin boards.

There are numerous local churches, with medium to small congregations, and attended primarily in ethnic groupings.  There are four county and state parks, plus a community center in both communities.  Trilby has a non-dues community association and Lacoochee has a “Boys and Girls Club.”  Both are working to improve pride through local involvement in social and community improvement projects.  “The Christian Edge” is an experimental Christian coffee house sponsoring a 4-H club and Saturday evening music, coffee and smoothies.

Along US 301 and US 98 are areas zoned commercial, and in those zones, there are bars, markets, trucking, junkyards, restaurants, and miniature golf.  The old 40-acre, rail accessible, Cummer Sawmill area is now owned by a grain distributor, and is mostly vacant, looking for light or heavy industry.

Presently in the Trilby area, there is a full range of housing.  As seen on the County Assessor’s map, (Attachment A) there are clusters of high-density properties.  These come from the past when the railroad and sawmill industries existed.  These areas range from one-fifth acre to one half-acre lots along the present and previous rail lines, and in the “company town” near the old Cummer Mill.  Many of these home sites are run-down or abandoned, or have been replaced by mobile homes.  The assessed value of some sites is under ten thousand with a standing home.  Near the Lacoochee Elementary School and the County Park is a Pasco Housing Authority project with homes and duplexes for over 50 families.  There are only a few trailer parks with about 25 sites each.  The “Sawmill Campground,” a diversity-oriented park, has over 200 trailer and camping sites.

Mid-range homes are along Trilby Road and Old Trilby Road.  Many of these home sites are one-quarter acre to one-or two-acre sites with block homes built or upgraded within the past 50 years.  Their values are between $75,000 to $150,000.  Small lot homes are in Trilby Manor, and the Peachtree Road subdivision has one-acre lots

Higher-end homes are in the Trilby Trails equestrian subdivision and Hunter Hill.  These are five-and ten-acre lots with single homes and deed restrictions.  Most of the 45 Trilby Trails homes also have horses and barns.

A view could be that people who can initially afford homes on one acre or more would be better stewards and pay more taxes than people with limited income searching for cheap housing.

This map is very misleading.  It appears that the decision to classify land as available for development is that it is at least five acres, does not have a dwelling on it, and is not legally prohibited from development.  It would be better entitled, “Open, attractive land not yet raped by developers.”  The green legend for the open lands should be construed as un-crowded, native, and agricultural lands, not as a green light for developers.

Land owners, developers and builders are not inherently bad people.  They hope to make money, and as Commissioner Simon states, “the American way is to always make as much money as one can.”

The purpose of our presentation has been to promote intelligent growth that retains the rural character and beauty of the area.  Large, dense developments and heavily traveled roads are unacceptable and would destroy the rural character.  We also encourage non-polluting, labor-intensive industrial growth at the Lacoochee Industrial Park using the existing workforce.

East Pasco County is, in most places, an unspoiled rural paradise (with hurricanes).  With restraint, guidance, leadership and control from County government, development in subdivisions and individual buildings lots can be consistent with a rural way of life.

Recommendations For The Future in the Trilby Area

The Way Life Can Be.

Hold final approval for all new subdevelopment construction in Northeast Pasco County until completion of this special study.

Do not allow higher density than already exists in either zoning or land use in order to preserve the rural character of the area.

Set a net lot size minimum of three per acre even in conservation subdivisions and clustering subdivisions that are practical alternatives to checkerboard plats.  Open space set aside in these groups should be protected through enforceable deed restrictions.

Do not allow creation of new “city centers” or isolated big box sites in this rural area.  Dade City has the infrastructure and can expand to what Northeast Pasco needs.

Limit all commercial development to existing commercially zoned areas along US 98 and US 301.

Designate County Road 41 (Blanton Rd) from I-75 to Dade City a scenic highway.

Establish a public task force or subcommittee to coordinate with Hernando County in the creation of any developments on either side of the county line that can affect the other county through traffic or environmental impact.

Require larger donations of land by developers for expansion of utilities and school buildings.  A developer should set aside an amount of land and deed it to the County Parks and County Schools based upon the possible full development impact.

Back to TrilbyFl.com home page